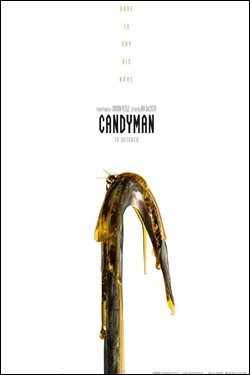 This movie serves as a sequel to the 1992 horror movie "Candyman". It is set in the same Chicago neighbourhood where the legend began, but the section where the Cabrini-Green housing projects once stood is now gentrified. After visual artist Anthony McCoy moves into a luxury condo there with his girlfriend, gallery director Brianna Cartwright, he soon learns about the vengeful spirit that haunts the place. Called Candyman, he becomes fascinated by it and begins using the macabre details behind the supernatural killer`s true story as inpiration for his new paintings. Unfortunately for him, this leads to not only a horrifying wave of violence but also forces him to face his past which unravels his sanity.